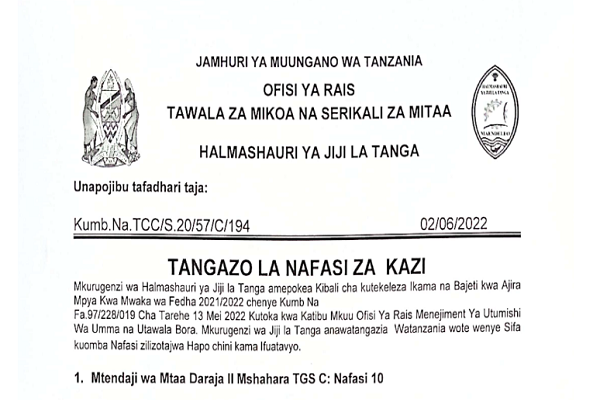 Tanga District is one of the colonial districts established during the era with its Headquarters at Tanga. After Independence in 1961 the Government developed an administrative system at the Central and Local Government levels and later changes were made to meet the wishes of the patriotic Government. Tanga District originally included Muheza, Mkinga and Tanga Districts itself .Muheza Districts was created in 1998 and Mkinga District was split into two districts – Mkinga and Rungwe.Tanga District has 4 constituencies namely: Tanga Rural, Tanga Urban, Vangani and Muheza.

The city of Tanga is located at latitudes 38o53 ’and 39o10’ eastward and latitudes 5o and 5o16 ’south of the Equator. Tanga City is located in the North East of Tanzania, bordering Muheza District Council on the West and South, North Mkinga District Council and East Indian Ocean. Tanga is located 350 km north of Dar es Salaam and 250 km south of Mombasa. , Kenya.Tanga has a tropical, equatorial climate with all months having mean temperatures above 18o C and annual precipitation averaging over 2,000 mm.