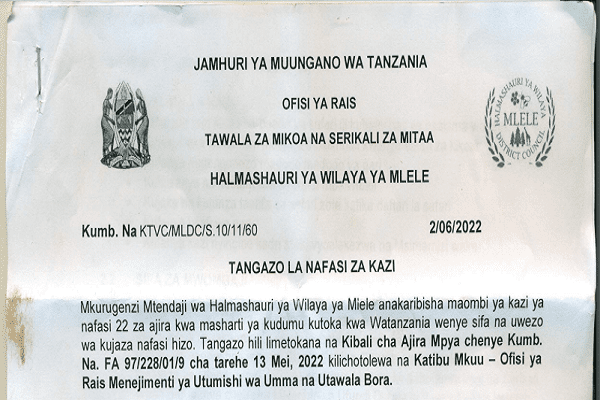 The Council is given a wide-range of functions which include:

(iii) Subject to the national policies and plans for the rural and urban development; to further the social and economic development of its area of jurisdiction. Mlele District Council is one of 185 Local Authorities in Tanzania undertaking various reform measures in the context of Decentralization by Devolution (D by D).

The Council is expecting to improve the delivery of services to the public. In fulfilling the Council’s functions as summarized in section 111 of the Local Government (District Authorities) Act of 1982, the Council requires strategic decision making to trigger sustainable local economic development through strategic planning at Council level. .Council’s strategic decision making should produce an integrated sustainable growth plan which should:- Identify key development areas and the role of Council services in those areas.- Define a clear vision, objectives and statement of policies to guide the work of all staff.- Establish internal governance, accountability and management systems for operational efficiency.