The Yanga SC club has today officially announced the return of their former Congolese DR Congo winger Tuisila Kisinda who was playing for the Moroccan club RS Berkane.

Kisinda is returning to Yanga SC after joining RS Berkane on August 13 2021 alongside Simba SC star Clatous Chota Chama, yet Yanga have not made it clear whether Kisinda is returning on loan or they have signed him up as it is said that he signed a three-year contract with Berkane and has served one year. 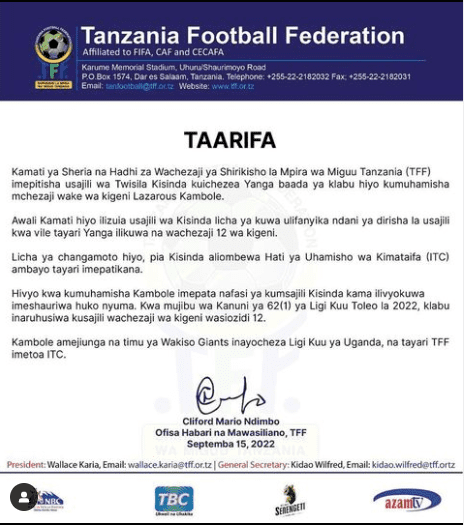 The Tanzania Football Federation (TFF), previously Football Association of Tanzania (FAT), is the governing body of football in Tanzania and oversees the Tanzania national football teams. It was founded in 1930 and is affiliated to FIFA since 1964.

FAT existed until 2004 when the new name TFF came into force after the body’s General Assembly held on 27th December of the same year.

TFF regions and blocks are becoming more empowered under his leadership as he believes they are the drivers of development agenda.

Tuisila Rossien Kisinda is a football or soccer player playing for the Yanga Sc club of Tanzania and the national team of the Democratic Republic of Congo.